Lawyers of Distinction SPAM (Plus a Lesson on Useless Traffic)

I thought my expose on the Lawyers of Distinction Scam (in which my kid’s pet chicken, Zippy made it through the LOD’s vetting process) may have pushed them to quiet down. Apparently NOT. Yesterday, Lawyers of Distinction mass spammed thousands of Lawyers (and a handful of non-lawyers), falsely suggesting someone had nominated them for this bogus, unvetted, bullshit and otherwise misleading “award”.

How do I know?

Yesterday, Mockingbird’s site got pummeled with SEO based traffic to the Lawyers of Distinction articles we’ve posted.

Looks like an email was spammed out around 10:00 am PST yesterday, and many of those email recipients decided to undertake a modicum of research before plunking down the equivalent of a (very) nice car payment for a piece of lacquered wood and some self supplication for a fragile ego.

There was a smattering of web chatter about these faux “nominations.” Here’s Helen Bukulmez: 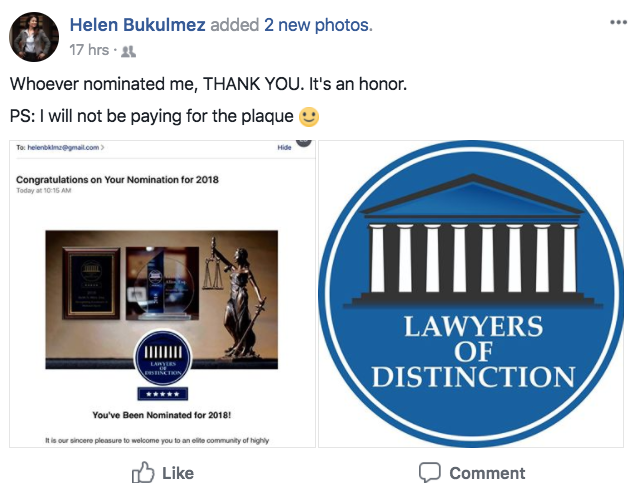 And not all “lawyer” nominations were even for lawyers…here’s a comment from Abby Peretz:

I received notification that I, too, am eligible for this distinguished “award!” Here’s the catch: I’m a law student. I don’t hold a license anywhere. My law review Note hasn’t been published yet (but will be soon!). The extent of my legal experience derives from a few very meaningful, wonderful externships in various practice areas, including consumer protection. Jesse’s email to me is a big fat UDAP. I’m tempted to pass it along to some folks I know.

I don’t know where all of these email addresses were sourced from, and I don’t care. So – if you ego is blinding your ability to connect the dots…no one nominated you. You are being played. You are being pitched an overpriced plaque that you have to pay for EACH YEAR! Still don’t believe me…come talk to Zippy, she can set you straight.

If you want more than a rant out of this post, here’s your opportunity:

I’m going to use this example to show how NOT all traffic is equal. In general, I get annoyed with lawyers focused on ranking reports (a useless metric for determining how well your site is performing). Instead we prefer to look at actual traffic. BUT…and this is a big BUT…not all traffic is created equal. You can see here that despite the massive influx of traffic to our site, we received just one single inquiry from the article – meaning just 0.035% of readers were interested in inquiring about hiring us.

It’s going to take a lot of readers to build a business on that performance. In contrast, our typical contact rate is 0.5%. So clearly not all traffic is created equal. BUT – and here’s the counterpoint to my argument – some high volume pages do eventually generate an inquiry. Note #3 in the matrix above: our typically most read article is a post about setting up a google email account. The vast vast majority of readers who read this aren’t lawyers; they aren’t looking for marketing assistance; and almost none of them are lawyers looking for marketing assistance. BUT…we did get one inquiry from that post yesterday. So…in summary, not all traffic is created equal; however, enough volume can eventually generate business.