Back in October of last year, Mockingbird received another Cease and Desist Demand – this time from Jesse Brodsky at Lawyer’s of Distinction.  Turns out he was miffed at our post “When the Top 10% Means Nothing” which exposed his company, Lawyers of Distinction’s Top 10% Award as a charlatan scam. In short, Jesse makes his living peddling overpriced plaques to naive or egotistical lawyers.

I’ve posted a full transcript of Brodsky’s C&D letter, but here are some of the true gems amidst his defamation claims:

Your article is actionable and we will be initiating lawsuits against the author individually, as well as Mockingbird Marketing if this post is not immediately removed from the internet.

you refer to our offices as being in a strip shopping center, when in fact we have a corporate office in a traditional office building.

I’m not certain exactly how I was supposed to remove content from the Internet – apparently Jesse doesn’t really know how that Internet works. But, because Jesse threatened not only me, but also the author directly (Kelsey – one of our best people at Mockingbird) – I enlisted the counsel of renowned Ethics Counsel Brian Tannebaum*, to allay Kelsey’s concerns over being personally targeted by an overzealous lawyer.  Brian’s reply to her:

if I were you, the thing I’d be worried about right now is what you are going to eat for breakfast. After that I’d start concerning myself with lunch and then plans for the weekend. I’d put worrying about what you wrote right below whether you are soon to run out of toothpaste.

Naturally, I told Brodsky to go stick his head in the sand.

Jesse – So nice to finally put a name to your distinguished company.  Congratulations on the new office space – if you could kindly forward me the dates of your office upgrade, I’d be most appreciative. Finally, our post will stand.  As you may suspect, it is almost impossible to remove a post from the Internet, regardless of pugnacious lawyers.

Good luck with your future endeavors. I trust you won’t need to reach out to me again.
Regards,
Conrad

Like a true bully, Brodsky backed down, never coming good on his litigation threats. To be fair, I was admittedly hoping my snark would inspire a lawsuit so we could further introduce Jesse to the practical practice of law and  Florida’s anti-SLAPP legislation, but he didn’t bite. I thought we’d dig just a little deeper into Lawyers of Distinction. First their vetting process, which their Eligibility page describes as the following:

They also claim in their footer that:

Lawyers of Distinction members have been selected based upon a review and vetting process by our Selection Committee… These potential candidates who meet the criteria of our screening process have demonstrated a high degree of peer recognition and professional competence, placing them in the top 10% of all attorneys in the United States.  Attorneys may nominate other peers they feel warrant recognition or may nominate themselves. These candidates undergo the same rigorous review process.

So I thought I’d evaluate the vetting process, applying to Lawyers of Distinction membership, on behalf of my kid’s pet chicken, Zippy.  Surely their “rigorous review process” would disqualify a 3 1/2 month old Golden Wyandotte? (Ignoring for the moment that lawyers can self-nominate, which must be the epitome of egotistical self-supplication.)

First, I fired up an email address for Zippy through Yahoo and then impersonated retired comedian, Jon Stewart (no email address needed) to nominate Zippy: 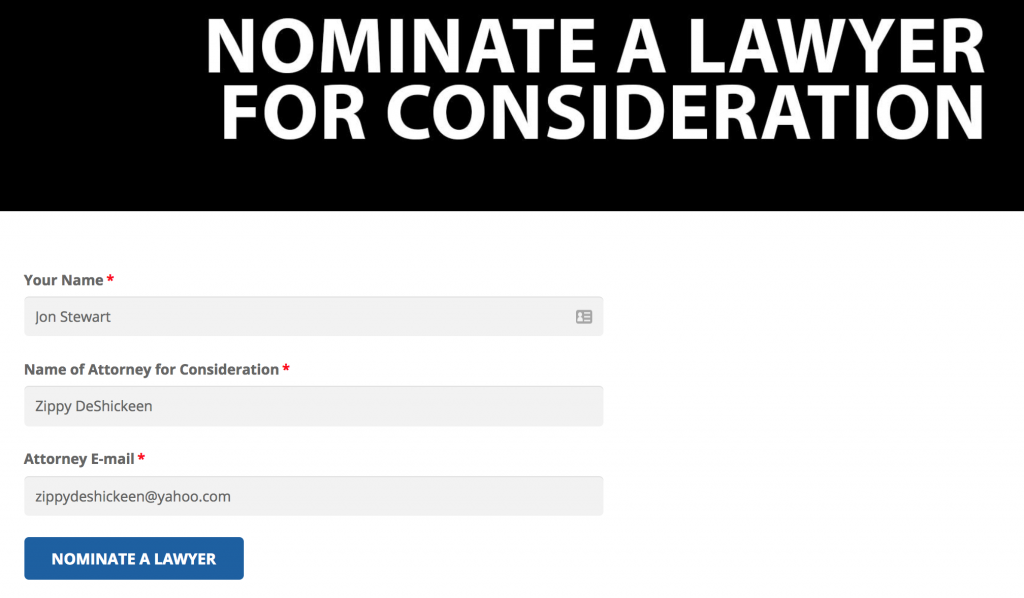 I thought the Jon Stewart reference might be a red flag for Lawyers of Distinction, but a few days later, Zippy’s Yahoo account got mail announcing her nomination and inviting her to take the next step….. 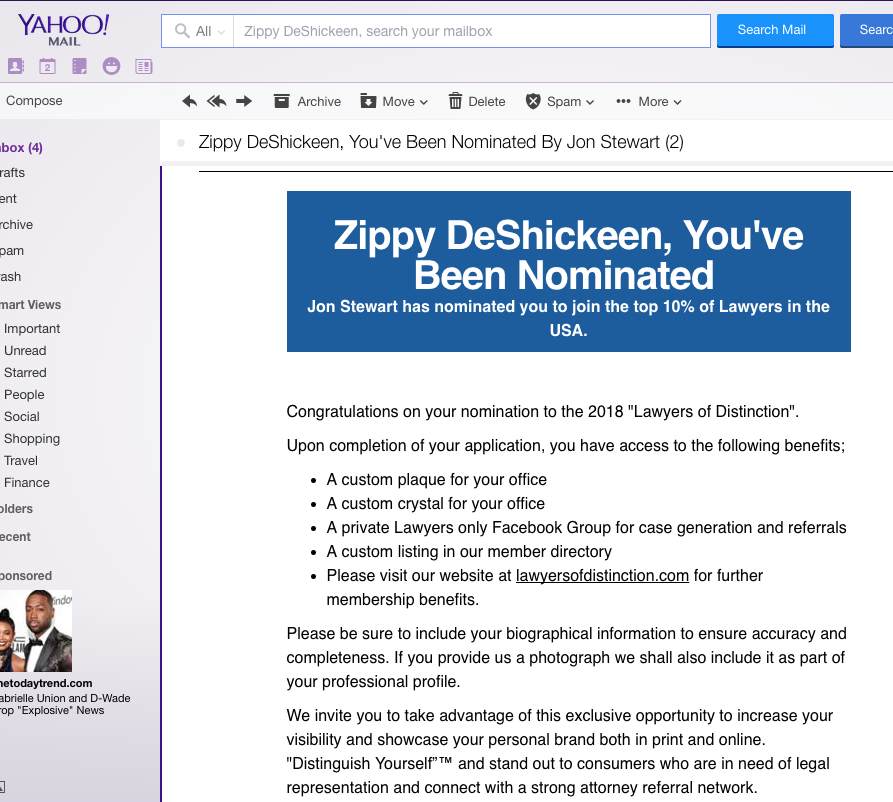 The key to this email is this sentence: “upon completion of your application you’ll have access….”  So, all Zippy needs to get the plaque is a completed application and $775?  Seriously? 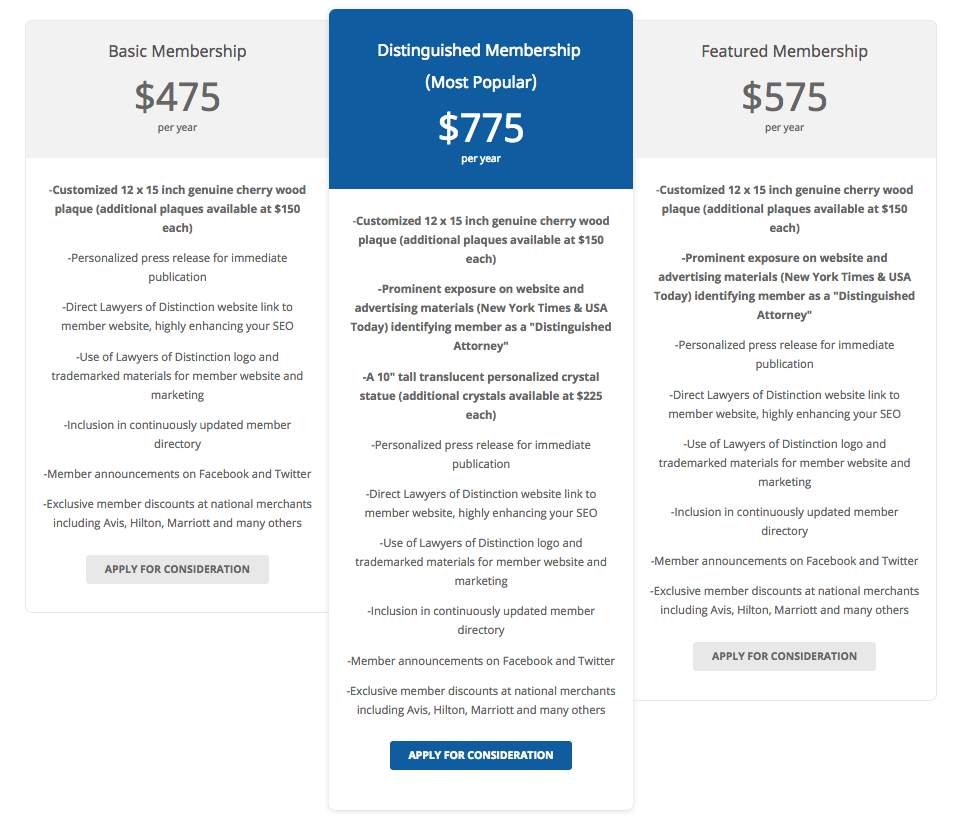 Surely they wanted to know more information about Zippy.  What about the background checks?  Independent Research? and Zippys scholarly writings?  Verdicts… Settlements…. Bar Certifications?  Surely that would follow in the next phase of the process; at a minimum, LOD would want to know what state Zippy was licensed in? a bar number? or a release to perform the background check?  Some of her awards?  Some bio information? But alas, the application required nothing more than a name, address and a domain (although, I felt certainly someone would at the very least check out www.deshickeenlaw.com, find out it was not operational and then reject Zippy’s application…) 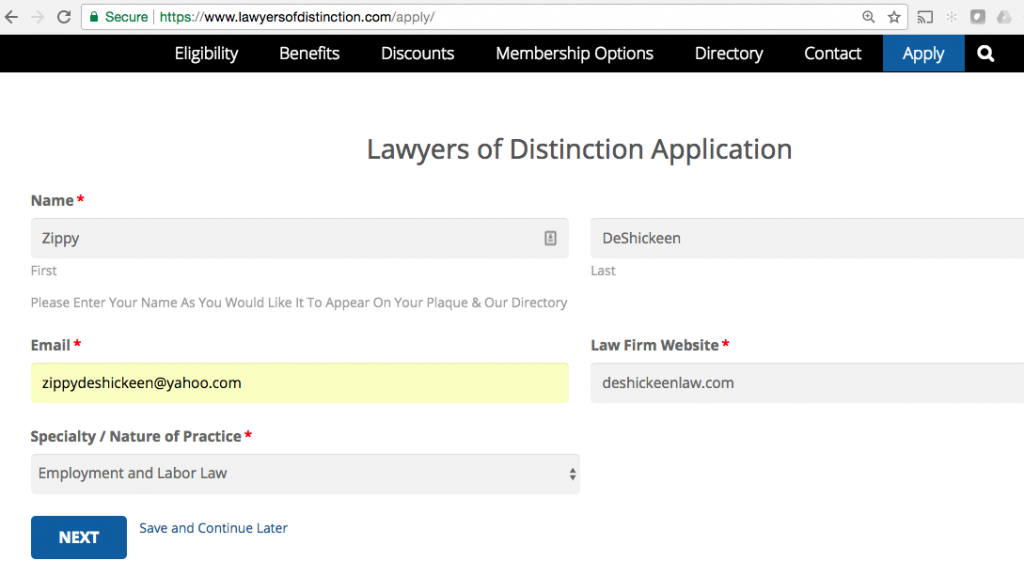 Apparently no one at LOD bothered to review Zippy’s non-existent website, www.DeShickeenLaw.com  before shepherding me to the payment screen.  In the next step, LOD was very happy to order up a plaque for a 3 month old hen, placing her in Top 10% Among Lawyers. 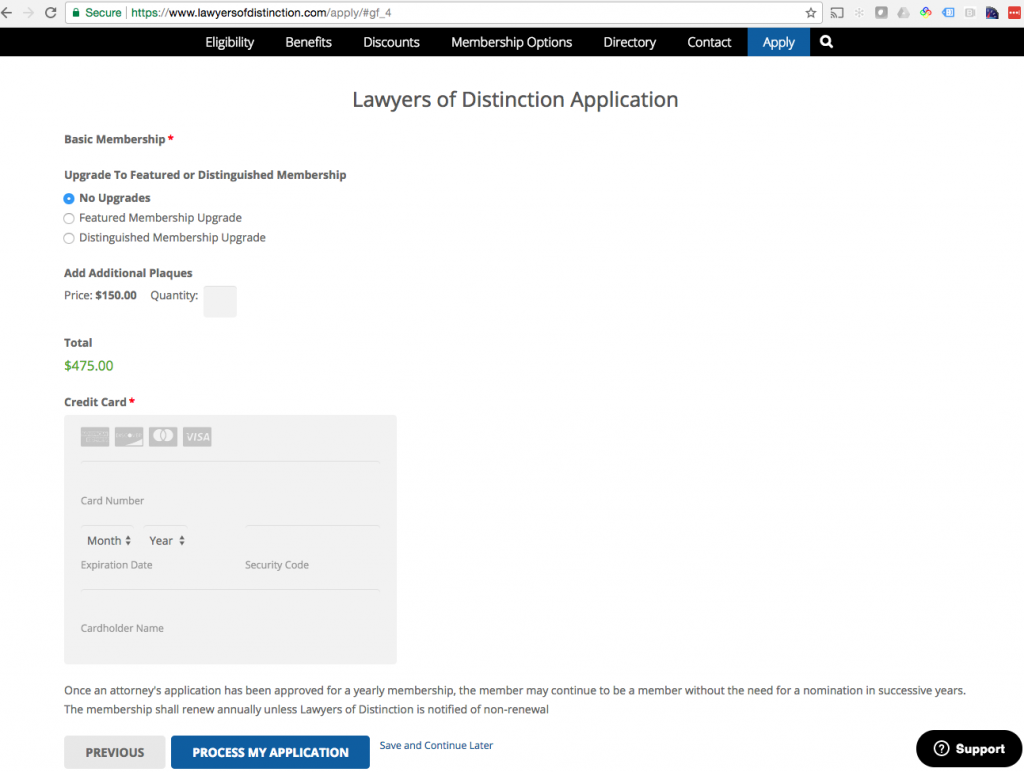 And the most insidious part of this is the literal fine print, the part that says, “The membership shall renew annually unless Lawyers of Distinction is notified of non-renewal.”  So every year, Zippy’s credit card is going to get pinged for another $775.  That’s a pretty good revenue stream.  In summation, after impersonating a comedian, nominating a chicken and submitting nothing more than a non-existent website, I can purchase an annual subscription for a plaque for a tidy sum, for a hen who is still too young to even lay an egg.”

Dogs Among the Top 10% of Lawyers

Now, while I couldn’t bring myself to send Jesse $775 via credit card, apparently, not one, but two different canines footed the bill and have made it through Lawyers of Distinction’s rigorous vetting process.  Meet, Shasharoosticus a Lawyer of Distinction (My Dog is Better Than Your Lawyer) and canine to (real) attorney Andrew Tolchin and wait till you hear teacup poodle, Lucy’s acceptance speech.

I wanted to know more about Jesse… who is this guy duping lawyers into these overpriced lacquered boards?  Turns out Jesse Brodsky sent us our C&D just 4 months after being admitted to the Florida State Bar…. 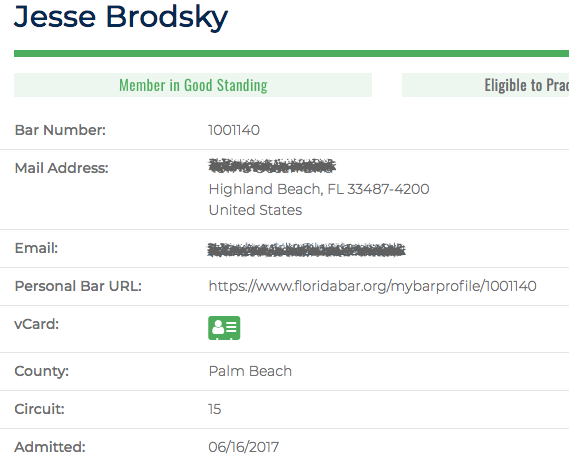 Now, Lawyers of Distinction has really upped their marketing since Brodsky has come on board. Recently I’ve started seeing them more frequently, advertising in legal rags, Twitter and prolifically on Facebook.  And they’ve been around since before Brodsky’s first year of law school. I had thought perhaps this was the entrepreneurial endeavor of a feckless law student – as I was unable to find anyone else associated with the company.  So I looked up Lawyers of Distinction in the Florida Business Directory to uncover, the long term owner, attorney Robert B. Baker of Baker and Zimmerman, who registered the business back in 2009.  Ironically, the Baker and Zimmerman site is devoid of any mention of Lawyers of Distinction – in fact neither Baker nor Zimmerman is a recipient.  According to Avvo, Baker has been suspended in Massachusetts, Rhode Island, and New York and was reprimanded by the Florida Bar. I’m pretty sure if this makes him decidedly under qualified to vet the Top 10% of Lawyers. 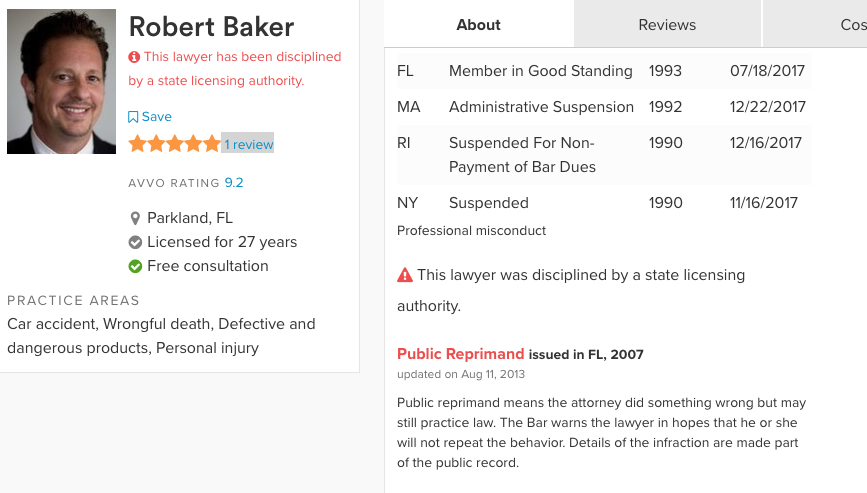 The First Amendment and Bogus Awards

All of this brings about serious first amendment issues. During my time at Avvo, we ran into challenges of our right to publish the Avvo Rating and ended up working with Bruce Johnson of Davis Wright Tremaine, the country’s foremost expert on the intersection of the 1st amendment and the Internet.  I’ve invited Bruce to join us next week for a webinar called Blogging and the First Amendment.  We plan to discuss the legal framework for publishing online content as it pertains to the First Amendment, including the right of Lawyers of Distinction to publish the clearly bogus awards as well as our right to call them to the carpet for doing so.  I’d invite you to join us,  January 9th at 1:30 Pacific time.

And if you’d like a running log of lawyers duped into this service, try the Lawyers of Distinction Twitter Feed.  But you won’t find Zippy on there… she’s too smart. 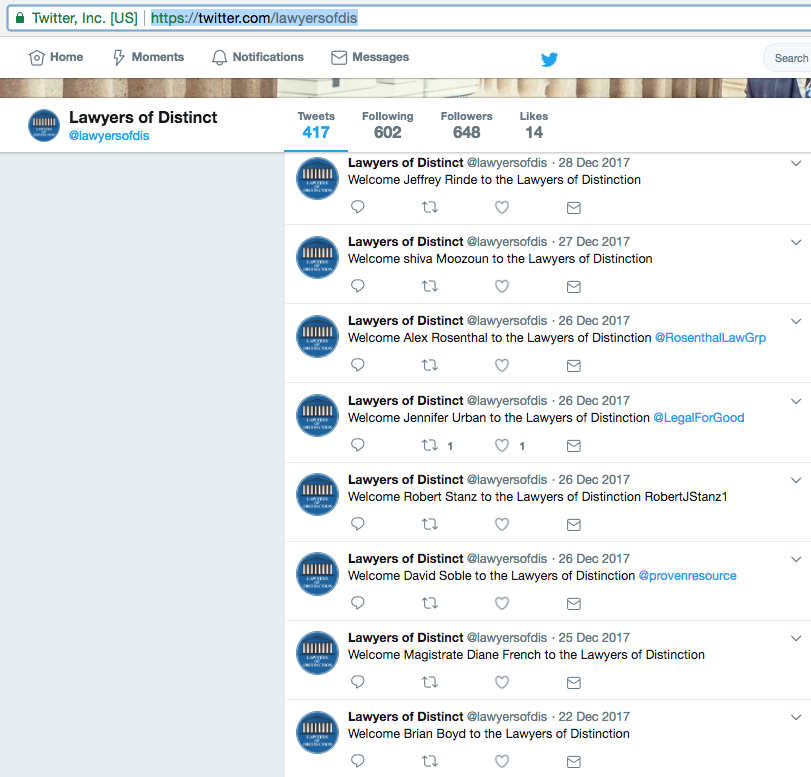 *Brian Tannebaum is not a lawyer of distinction.  The only plaques he displays are of his prodigious high end wine collection, and then, only upon specific request.