While Google allows bidding on other firms’ brands (think Coke bidding on people looking for Pepsi), it doesn’t let Coke use Pepsi’s name in the text of the advertisement itself. So for example, while Mockingbird can bid on Scorpion, we couldn’t have an add that says, “Don’t get trapped by Scorpion’s proprietary website platform” or “Scorpion won’t give you access to Google Ads campaigns, but we do.” Part of Google’s position on this, I suspect, is to avoid the potential subjective call of Coke pretending it is Pepsi. While that may be an unlikely mistake for big well known brands, its much more of an issue for mostly unbranded industries, such as…legal.

One sneaky work around for this is misspellings of the patsy’s brand name. To whit…here’s Apex Chat advertising their superiority to…Nagage on a search query for “ngage chat.” 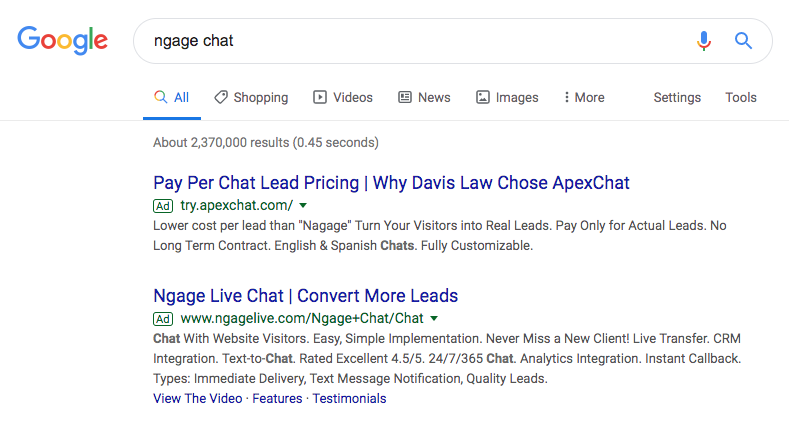 Note that Apex is bidding pretty aggressively as they are outbidding Ngage on their own brand and presumably have a much lower quality score for that term. Think this is just an innocent spelling mistake? Oh your naivety amuses me. Here’s another ad from Apex showcasing how they deliver more features and more leads than…Nagage.

As our Director of Advertising told me, it’s most likely against the rules, but could probably work for a while though…until it gets flagged. And Ngage, don’t send me a thank you note…you are on SEO Santa’s naughty list too. Just hope Scropion doesn’t notice our ads…