It’s already hard enough getting people to your site, so once you’ve succeeded in having a prospect click an advertisement or organic result, you want to do everything you can to convert them into a client. At the least, you want to have a chance to see if they’re a good fit for your services.

Unfortunately, one of the tools that’s supposed to make it as easy as possible for people to contact you can have the exact opposite result you’ve intended. Offering a “chat” option on your site, when done poorly, can absolutely kill your conversions and send your bounce rate through the roof.

We’ve written before about how you should be very cautious with the way chat is implemented on your site. However, one recent incident noted by Premier Law Group, highlighted the importance of carefully monitoring any changes to your chat script.

Premier Law Group has managed to keep their bounce rate somewhere in the neighborhood of 20-25%. This means that only approximately 1 in 5 visitors leave the site without viewing more than one page.

The traditional chat interface they’ve used has been the somewhat obtrusive, but fairly commonplace dropdown similar to what’s pictured below: 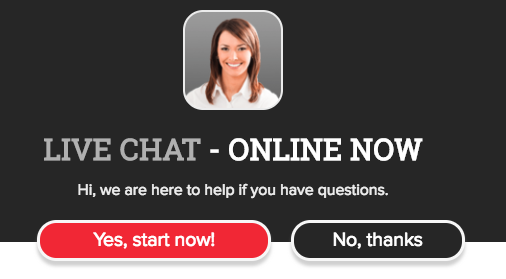 It’s pretty annoying, but only takes up the upper portion of the screen.

Following negative feedback from users about the annoyance of having a chat bar cover the top of the screen by default, the firm attempted to mitigate this by immediately displaying the chat popup and allowing users to clear it if they didn’t want to use the feature.

It had the exact opposite result of what they’d hoped.

Can you tell which day they changed the chat interface to a full screen popover?

There’s been plenty written about the SEO dangers of using pop-ups, but this highlights exactly how poor the user experience is when you aggressively push something that’s only useful to a very small percentage of visitors.

Premier Law Group was savvy enough to immediately catch the jump in their bounce rate, concede that the well-intentioned change was a bad idea, and revert to the previous chat display.

The full screen takeover was live for a few days, and immediately following the change back to the old version, the bounce rate settled back into the 20% range.

The eventual compromise was to move the chat display to the bottom of the screen, so at least the top navigation is accessible when it’s being shown on arrival.

Ultimately, whether the additional conversions from chat is worth sacrificing user experience is a question every firm should think about prior to implementation. However, once you decide to add chat on your site, be very careful about how it’s displayed or you might be doing a lot more harm than good.