Every Social Media Consultant is Lying to You

There, I said it.

We’ve done it to you again – the self proclaimed mavens, experts, gurus and (self) published authors who peddle social media marketing to you guys have been lying. Or we just don’t understand how marketing works in legal.  But probably we’re lying – because we’d really like to cash your retainer to help you republish your blog posts on your Facebook page, even though there are plenty of tools that will automate that process for free.  Just like the SEOs  do. And you’ve all fallen for it again.

Now, I’m not the first person to say this, but it seems like no one is listening.  To understand social media marketing for lawyers in soundbite, consider this from Sam Glover’s anti-Facebook diatribe:

Legal is NOT a Social Issue

With few exceptions, legal issues are extremely private.  I’m more likely to publicly  “like” my anti-herpes medicine than my DUI lawyer.  It’s not because I hate my lawyer – in fact I love her – its that I don’t want anyone to know that I need her because I’m facing incarceration, divorce, arrest, unemployment, deportation, or the IRS.   And if I need a lawyer for one of these private issues, there is no way on God’s green earth I’m initiating that search on anything remotely public like social media.

And this is the mistake that most self proclaimed social media experts (especially those who don’t work exclusively in legal) miss.  Standard social media marketing practice recommends building social media-based relationships with thought leaders and leveraging those individuals to expand the conversation about your brand.  This works for sneakers.  It works for religion. It works for Chevys and Harley Davidsons.  It works for soap and soup and sex toys.  It doesn’t work for lawyers.

If you personally wouldn’t start your search for a plumber on Twitter, why on earth would you imagine anyone initiate a search for a DUI attorney on Facebook?

There is nothing more lonely that a DUI lawyer’s social media profile – which may have a few likes from his mom and law school buddies but otherwise is a barren wasteland screaming “nobody likes me”.  And stop sending out those like requests – I get plenty of them every day and nothing does less to “build a relationship with your audience” than begging for them to publicly advertise how much they like your divorce firm.

Everyone Wants Your Social Media Dollar

It seems that everyone is getting into the social media marketing game – even Lexis Nexis is happy to take your money to “Establish a Presence on Facebook, LinkedIn and Twitter”.  Bleh.  The Lexis Nexis marketing drivel epitomizes the huge failure of applying generic social media concepts to the very unique legal marketplace:

Half of all online conversations take place on social networks such as Facebook® and Twitter®. And 47 percent of customers say social media sites influence their decision to purchase a company’s products or services.

You’d think that Lexis, being well, errr . . . Lexis, would have taken the time to survey people about how social media sites influence their decision to purchase a lawyer’s services.   But they didn’t – because they already know the answer and the social media consultants don’t want to admit it.  They’d prefer the legal industry continue to believe in the false complexity and ever falser effectiveness of this latest marketing channel fad.

Even if social media were effective in legal . . . it is simply impossible to outsource the joining of conversations, and demonstration of thought leadership.  And don’t get me started about the suggestions of the links between social and SEO – other than to say that Matt Cutts continuously insists that Google Plus’ are NOT a ranking factor.  But I digress.

If (and this is a big if) prospective clients use social to vet a prospective attorney – consider what you want them to see.  Let me give you a hint:  what you don’t want them to see is a slew of third party outsourced regurgitations of local news articles thinly related to your practice of law all ending with an identical admonishment to quickly call your law firm – vomited verbatim onto your Facebook/Twitter/LinkedIn/Google Plus.

This is what you want them to see: 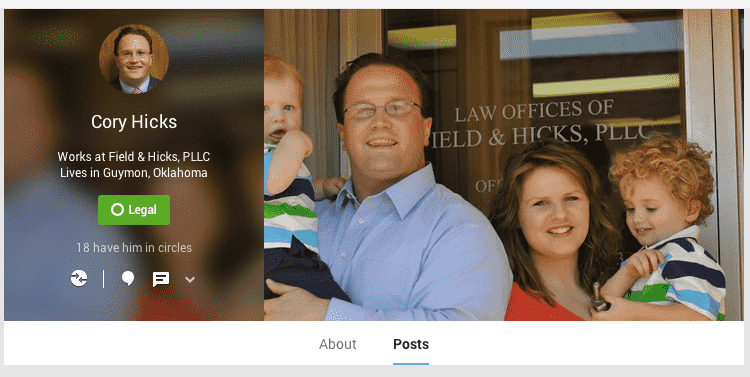 This is a guy I want to hire – yes he’s a lawyer, but there’s no leather bound books, scales or justice of roman columns.  For the love of all things holy, he’s not even wearing a tie!  He’s a dad and the three most important things in his life are standing right next to him.  Kind of reminds me of me.  The is the kind of guy I’d be happy to spend some money on.  And I bet he’ll never ask me to add this silly page to my “circles.”

Or how about this guy: 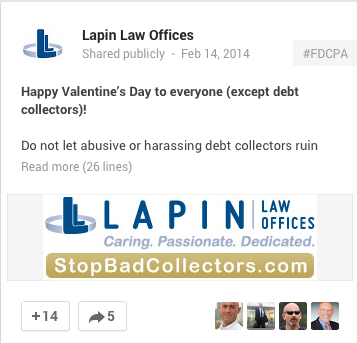 This is from Jeffrey Lapin’s Google Plus account.  Jeffrey hates abusive debt collectors – and frankly, if I’m dirt broke and being harassed by some aggressive scumbag in a call center who threatens my house at every possible step I probably hate them too.  If I jump with fear when the phone rings, I’d be pretty happy if Bill the Debt Collector got dumped  by his girlfriend on Valentine’s Day and wish Bill a lonely miserable Valentine’s Day sitting in front of the TV all alone.

And I’m sure the social media marketing peddlers will disagree . . . they’ll site the impact of social shares in driving links, they’ll mention “authorship” and assure you they can get your little picture in Google SERPs, they’ll convince you that social will improve your rankings.  Sounds like SEO to me, not social media.  There is a fundamental difference. Don’t entrust your firm’s marketing to someone who can’t make the distinction.

Update:  This post is getting a surprising amount of interest – so I thought I’d end it with this picture:  a post of all of the twitter results for the query:  “need accident lawyer”.  The results are embarrassing and utterly devoid of consumers starting their search for a lawyer on this most widely accessible (i.e. not through private connections) social platform.  Try a search for your own practice area here:  search.twitter.com and see if you don’t get similar results. 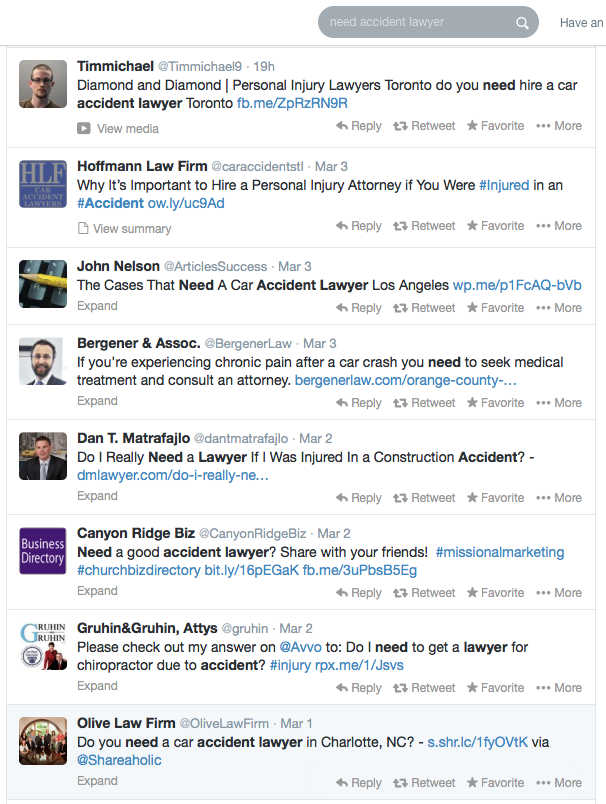 10 Responses to “Every Social Media Consultant is Lying to You”