UPDATE 4/10/19: Google has announced this issue has been fully resolved. 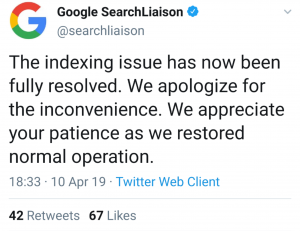 Last Thursday, webmasters started noticing issues with Google’s indexation of pages throughout the web. Google had been removing pages from their search results for no apparent reason.

Google acknowledged the issue on Saturday, while also incorrectly reporting that the issues had been fixed. They haven’t provided any specific information around what caused the problem in the first place. 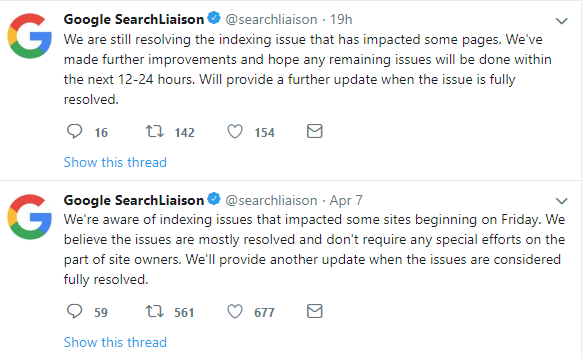 On Sunday, Danny Sullivan tweeted from the Google SearchLiaison (@searchliaison) that they are actively working on completely resolving the issue and that it was mostly fixed.

In his tweet, Danny also stated that the problem is solely on Google’s end, however, if there are high-importance pages that you noticed have been de-indexed you can request re-indexing through Google Search Console’s URL Inspection Tool.

John Mueller pointed out that even once the issue has been fixed, webmasters shouldn’t expect that all their website’s pages be added back to Google’s index. Additionally, he stated that “Awesome sites with minimal duplication help us recognize the value of indexing more of your pages.”