Impacts of Google’s January Update on the Legal Industry

Google released a new core update in mid-January, most of which has been rolled out at this point. As with all updates, Google reassured webmasters that no specific sites or industries were targeted. That being said, some industries saw greater impacts than others. And since we’re a legal marketing agency, we like to focus on the impacts on the legal industry.

Based on research from SEMrush.com, the legal and government industries have seen a fair amount of volatility over the past week. The peak days of change were January 14-16, and things appear to be back to normal now.

But just because things are no longer changing doesn’t mean there wasn’t an impact. SEMrush works to track SERPs (search engine results pages) in a number of categories, from featured snippets to reviews.

By looking at a selection of these SERPs (not all of them are relevant to the legal industry, such as shopping results) we can get an idea of how legal websites might have been affected.

HTTPS usage saw a drop when the update was rolled out and has been steadily declining since. Fortunately, it looks like it might be bouncing back.

Local results, or “Local pack” as it’s called on SEMrush, consists of location-based results that appear on the map and the first three results (see below).  After an initial dip, local SERPs seem to have bounced back to where they were before the update. 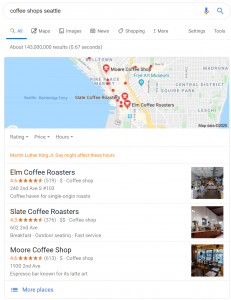 This metric refers to the number of organic results that appear with a star rating under the URL. As with the local results, there was an initial dip immediately following the update. Fortunately, this result is also creeping back up to where it was.

Top ads refer to the ads that appear at the top of the page of search results. These have been seeing some serious fluctuations over the past 30 days, but seem to have been on a steady increase since before the update.

What Does This Mean

So what do these metrics really mean for you and your business? Mostly it means that there might be a bit of instability in your traffic for a little while after this update. Unless your website is seeing a long-lasting and extreme drop in traffic, it’s nothing to worry about.