As a business owner, I’ve mostly eschewed getting political online.  That ends now.

Today we announced the candidacy of Jason Rittereiser in his bid to unseat a Republican incumbent in Washington’s 8th Congressional District in the upcoming mid-term elections.

Seventeen years ago, I came to Seattle a die hard, life-long conservative and have found myself slowly leaning towards the center ever since. In 2004, I posted a “Republicans for Kerry” bumper sticker on the back of my VW Jetta.  I was thrilled to brush shoulders with Obama at his WA campaign headquarters, which coincidentally was next door to Avvo’s second office.  Last year, I notched a protest vote for Jill Stein.  I’ve increasingly found myself drawn to what I would have formerly called bleeding heart causes and have often wondered if its a product of the sea air, proximity to Mt. Rainier, or something they put in the chai lattes at Starbucks.

There’s a great line in Inherit the Wind, “maybe it is you who have changed, by standing still.”  I’ve come to the conclusion that the shift in political standing isn’t because of 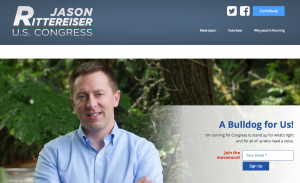 my personal changes, but because the conservative landscape has shifted so much underneath the country. I find today’s political miasma nauseating and I look forward to playing a small part in return a semblance of balance to the political system. Thus my deep pride to be working for Jason’s campaign.

I’ll continue to fly my American flag regularly (unlike the majority of Seattleites – seriously you should consider how much it means to people in the service to see those flags flying, but I digress…) and now have a chance to turn Mockingbird’s skills towards the political process. We are providing technical support, design services and of course marketing. I’ve always encouraged Mockingbird’s clients to embrace their true self in their public persona, as I’m 100% certain that people hire people who happen to be lawyers, instead of the other way around.  Its past time that I ate my own dogfood….

You can (and should) read more about Jason.  More to come (and if you happen to be in the greater Washington area, expect fundraiser invites from yours truly).