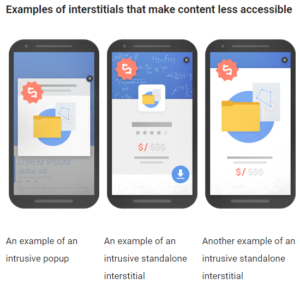 ‘ve long ranted against many of the implementations of chat conversions – especially on mobile devices – in which the chat is so aggressive that it covers up content, as well as all other forms of conversion – phone numbers and form fills.  In most cases, chat implementations are configured to maximize revenue for the chat provider, NOT the law firm.  Some providers have gone so far to refuse to allow customization of how aggressively their chat is implemented.  This is further exacerbated by most vendors positioning their service as a marketing channel instead of what it truly is – a conversion channel.  (i.e. just because someone ultimately converted through chat – the marketing cost for that user should still be attributed to SEO, Adwords, Avvo etc.)

This is even worse on mobile implementations – with both limited screen size and a (very) high converting device (a phone) being overruled by the obnoxious chat box.

But that may all change on January 10th.  Google has announced a penalty on sites implementing intrusive interstitials (those annoying pop up chat boxes would fall into this category). While chat isn’t specifically called out, the announcement does describe the concerns; including interstitials that cover the main content as they “provide a poorer experience to users than other pages where content is immediately accessible”.  Google very specifically calls this out as a SEO penalty for mobile – those types of pages “may not rank as highly”.

While Google has said “responsible interstitials” may remain – based on their description, I read the tealeaves as meaning chat pop ups that very quickly and aggressive cover content and all other forms of conversion most likely will incur an SEO penalty for mobile based searches.