The example below is so outrageous that it looks like a parody.  But its not.  It’s real attorney advertising and someone is paying for it.  (I know because I called and spoke to the attorney behind the site.)  This started with a friend of mine in the SEO industry – Mike Blumenthal – who forwarded me an email with the subject line: gotta love the chutzpa.

Attached was a screenshot of a footer for what looked like a law firm website, with a tiny blue on blue disclaimer in broken English:

The logos above are sample only, we are not associated with these vendors.

Hmmmm . . .  the logos include the Better Business Bureau, the California Association for Justice, The Beverly Hills Bar Association and of course, my beloved Avvo.  We know that third party endorsements go a long way to allay concerns of prospective clients of law firms, but this goes well beyond misleading.

Note that the site looks like a law firm website, yet there is absolutely no personal information about an attorney or even a law firm name.  The on-page optimization is horrendous – there are 13 instances of the phrase, “Los Angeles DUI”, keyword stuffed meta tags and of course, the exact match domain.

Even the faux testimonials are keyword stuffed with SEO optimized internal links.  And try reading the text here.

If you want a chuckle, read all of the “testimonials“; here’s a favorite excerpt:

“DUI attorney Los Angeles is the best law firm in Los Angeles to handle the drunk driving cases in favor of their clients.”

My favorite touch on the site is the fake Facebook like counter which suggests there are a whopping 5,100 people who have liked this non-firm on Facebook.  This one had to take some time:

Fortunately, the footer also contained a link to the  website developer.  Let’s see what happens here: 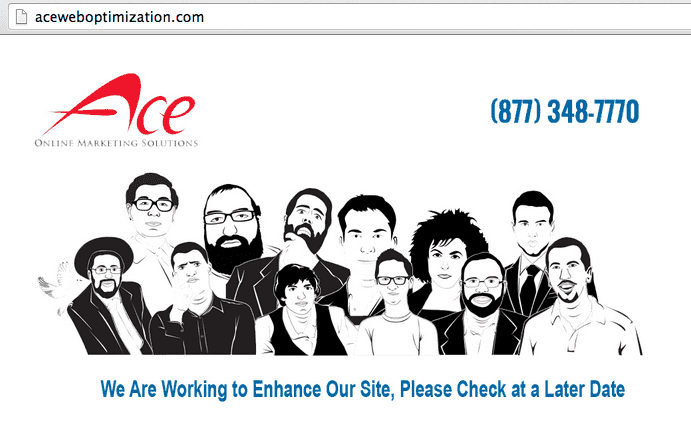 Just about what I’d expect.  So I gave Ace a call to see if they offered online advertising.  The guy who answered the phone assured me that he could get me ranking really high on the Internets.

My final step was to call the number on the DUI site itself . . . which was answered promptly and professionally (some of you could learn a lesson here) by an attorney.  I forced some awkward conversation by asking for the name of his firm and his name (and vetted him on Avvo to see if he was, in fact really an attorney.  The guy was helpful (assuming I had really just gotten out of jail on a DUI), compassionate and professional.

For all I know he has no idea that some shoddy marketing firm is being so misleading on his behalf.  Caveat emptor lawyers, caveat emptor.

Update:  Mike Blumenthal digs deep into how this site surfacing is a failure of Google’s Hummingbird.